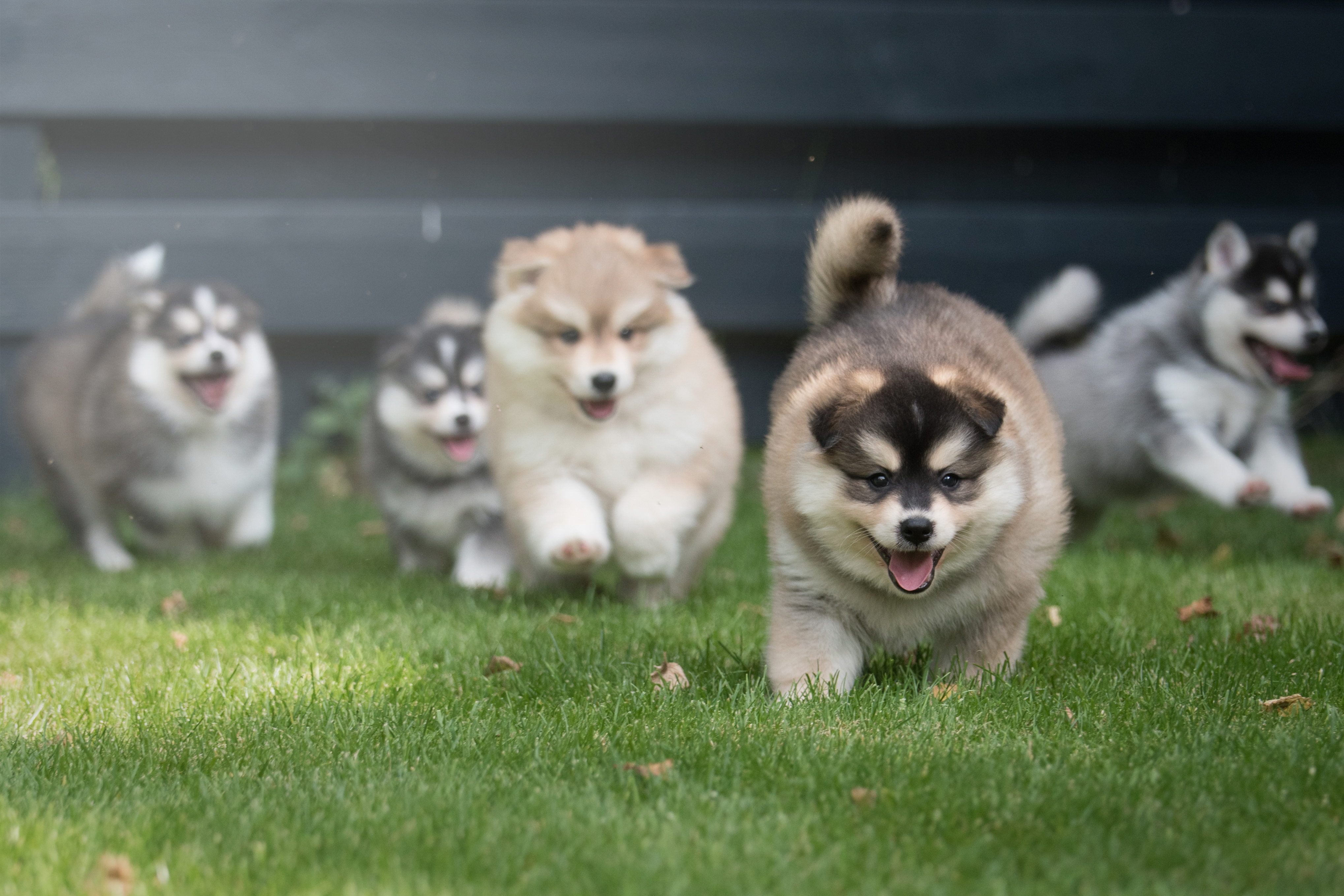 FIND A POMSKY. LET US HELP.

Click the button below to download a list of reputable Pomsky breeders near you and get updates about new litters every time a Pomsky is available.

Continue below for a list of approved Pomsky breeders in your state. 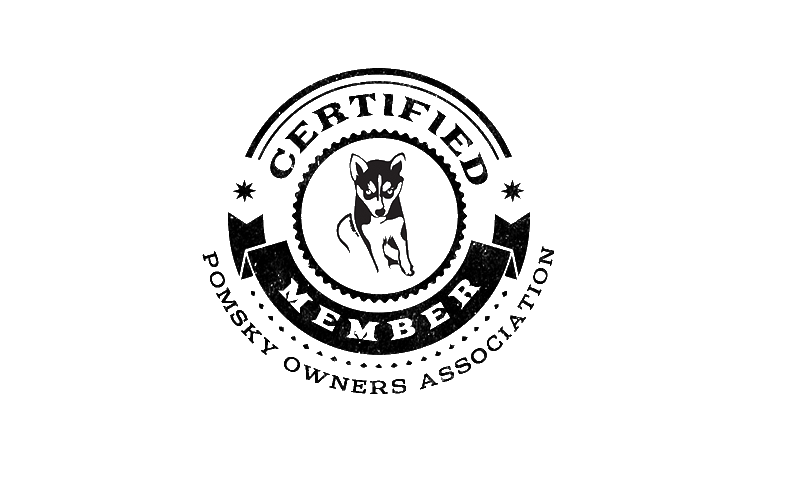 When Charlie was around 10 months old or so, I was offered to take her. My brother wasn’t able to keep her anymore because Charlie was just too restless for theUtah city life, and he and his family wasn’t going to be able to spend enough time with her….they thought it best to let her be somewhere with plenty of space to explore and get all of her energy out. When I took her I had never owned a dog, and had thought I never would. At first Charlie was anxious, and I didn’t know much about taking care of a dog, but after a few weeks on our farm in Idaho, she and I were right at home with each other.

I took her everywhere I went, and worked on training her for almost year. As I took her around, I always got comments on Charlie, how beautiful she was, and how much they would like to have a dog just like her.
So at almost two years old I decided I would find a good stud for her. I began working very diligently to find a good stud to make sure I was doing things right, to make sure we would have some good healthy puppies, as well as uphold the standard for this relatively new Pomsky breed.

After a very successful trip to Oregon where we found a lovely stud owner’s family, Charlie had her first litter on the way. The pregnancy was interesting, as Charlie became so much less active than her usual self….She was probably the most surprised, because running everywhere was a trademark of her personality.

It’s been a lot of work, and there’s been a lot to learn, but at Eastern Idaho Pomskies, we’re dedicated to only producing good, healthy, Pomsky puppies so others can enjoy this wonderful breed as I have….I always wondered what kind of dog I would get if I ever got one, and it turns out a Pomsky is just the dog for me.

We've been breeding for 5 years now and had 13 litters of pups with 3 more due this fall/winter.
I started breeding Pomsky right after going through some very difficult personal issue in my life. I went through a difficult time and was trying to find my way in life. I have always loved animals particularly dogs. I started talking to my mentor and she gave me some great advice and a realistic view of what would be needed to become an exceptional breeder. After about 6 months I was able to find my Keena (husky) and she is one of the best dogs I've ever had. Almost every puppy we have can be traced back to Keena. She is so sweet and such a great do, and we want to keep her genetics throughout our lines. Keena has been retired, and now just helps socialize the pups. Shortly after we got Keena we were able to get our first Pomsky Kayla from Pomsky Northern. Kayla was also such a sweetheart and had a great disposition. We're were also fortunate enough to get our Pomeranian Chip. Our first year of trying to breed puppies was unsuccessful and we didn't have any puppies that year. We had our first successful breeding in late 2015 and had a beautiful litter born Dec 2015. Our breeding program has been such a blessing to us. I was able to quit my office job when my grandmother was diagnosed with Alzheimer's and stay home, raise puppies, and take care of my grandmother until she passed away. The dogs were great with her and helped with Alzheimer's symptoms. My dogs have always been party family, and my husband, my adult children as well as my grandchildren have become an interictal part of raising well socialized and preloved puppies. We currently have 6 dams and 3 studs in our breeding program.  My pack has been such a blessing to me, and they have helped me through some very difficult times in my life, and simple can’t imagine life without them. 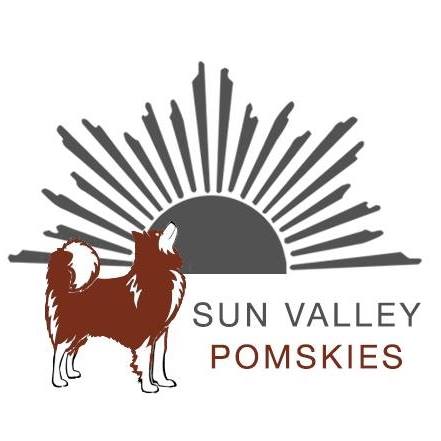 We are a small family owned and operated Pomsky breeder located 15 minutes outside Sun Valley, Idaho. Pomskies are the perfect companion dogs. We strive to produce healthy, loving, and well-tempered Pomskies! 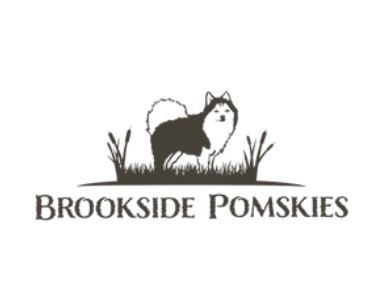 Our family lives on a small farm in Plymouth, Utah. Plymouth is a small town near the Idaho/Utah state border. We're surrounded with farms and ranches. We love the country life. We think it's heaven on earth.

We come from a big family of dog breeders. My mom has been breeding long before I started. She taught me everything I know. Now that my husband and I are settled down on our little farm, we have the wonderful opportunity of being introduced to the Pomsky breed; we absolutely fell in love with Pomskies!

We are not a mega breeder or "puppy mill".  We take great pride in owning just a few dogs. Our dogs have good temperament; they're smart, sweet, kind, lovable and rare. They enjoy a wonderful life without "kennels" here on our little farm.

Because our dogs are a part of our family, we raise them in our home; they're use to everyday sounds. They're well socialized with kids. They accompany us on family activities around the farm like horseback riding, rides in the truck, camping, and hiking. They're a loving part of our family!

We love our Pomskies and can truly say they are the most amazing breed on earth. 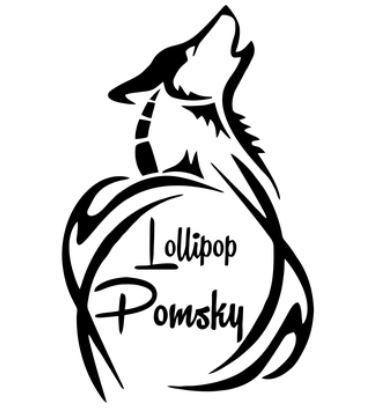 Lollipop Pomskies is an in home Pomsky breeder who strives to produce healthy and happy puppies to enrich the lives of others. Our Pomsky goal is to create a true recognized breed that is able to be shown and compete in conformation and performance events by working alongside reputable breeders and associations.

Home to the kindest and most adorable Pomskies in the Universe, Meraki Moon Pomskies ensures the highest quality Pomsky puppies for you to enjoy. With our high standard code of ethics, and no kennel policy, all of our dogs live a carefree life.

Meraki Moon Pomskies is a small breeder in Lebanon, Oregon, breeding Siberian Huskies and Pomskies since 2015. We specialize in genetics and are knowledge leaders producing top quality Pomskies. We do not have kennels, all our dogs are free to roam and play by day and crated at night. Our puppies are raised with children if all ages. Our children love dogs and our dogs love children! We keep our number of fur babies low so we can properly give them the time and attention they deserve! Our dogs are well taken care of physically, mentally and emotionally. Mamas are bred a total of 4-5 times total in their life time to ensure heath.

We offer the best valued, top quality puppies in the northwest!

Beverly Olsen my mother started breeding and grooming dog in 1972. In 1991 she taught me how to groom and taught me how to breed the best of the best and how to improve the breed that I was working with. My son Markus brought the Pomsky breed to my attention in 2012. My friend Lisa pushed me to breed the pomskies saying this is perfect for me. At the time I was finishing my degree in Forensic Science. I now breed Pomskys and I have incorporated my degree in DNA science to research my dogs and test the genetics they carry to produce the best of the best breed pomsky.

Mountain Shadow pups are micro chipped, dewormed, socialized and have received all of their first shots. In addition, Mountain Shadow Pomskies offers a 3 year guarantee and all pups have their origin verified through the University of California Davis.

We are dedicated to producing happy, healthy, friendly pomsky pups with beauty and brains. All pups are raised in our home with lots of socialization & love.

Portland Pomskies was founded in Spring of 2015. Our mission has been to find the most beautiful dogs to create the cutest pomskies in the world! We create Pomskies ranging in size from 5lb-30lb's. The sizes can vary depending on the ratio of husky to pomeranian as well as the different parent pairings.

Heather studied Biology and Genetics in college and has passed the AKC Dog breeding courses. She is especially educated and interested in the color genetics of both dogs and horses. Heather has been breeding dogs for over 15 years and has been training dogs since she was 10 years old.

Alma spent his childhood assisting his veterinary Grandfather, studied animal nutrition & husbandry in college and is a nationally recognized farrier, breeder, trainer and clinician with a particular interest in Gaited horses.

Pomsky Northerns strides to raise high quality animals that bring years of joy, entertainment and companionship to their owners. Alma and Heather’s years of experience and years of study have given them an eye for excellence, making them experts in the field.

We are Kirt and Charity McCallister. We have young children who socialize and love on our puppies everyday. We are a small family breeding program in Oregon. We love dogs and especially love Pomskies. All of our pomskies are indoor dogs and do everything with us. they are like family to us and I grew up breeding German Shepherds with my mother since I was 5 years old. Our puppies have great temperaments and are well socialized when they leave to their new families. Our goal is to breed happy and healthy puppies with blue eyes and husky masks. We are members of the International Pomsky Association and hold to the standards and ethics that they stand for. 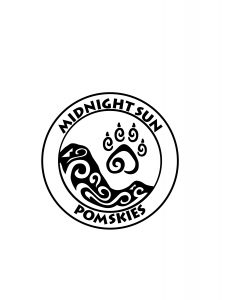 We are located above the Arctic Circle in Northern Alaska, so our puppies are true Alaskans! We have only the best purebred Siberian Husky females and Pomeranian Males so that we can produce the finest Pomskies possible.

At Midnight Sun Pomskies our entire goal is to breed beautiful, healthy, and fluffy Pomskies from Alaska! We love the breed, and we want to share that with you. Our puppies are raised in our home as part of the family, and they get to play with other dogs, cats, and are socialized with adult and child visitors alike. Although we are located in Alaska, we do offer shipping to major airports all around the United States.

READY TO FIND YOUR POMSKY?

Click the button below to download a list of reputable Pomsky breeders near you and get updates about new litters every time a Pomsky is available.